This Generation Will Not Pass Away | The Hard Sayings of Jesus

Immediately after the distress of those days

‘the sun will be darkened,
and the moon will not give its light;
the stars will fall from the sky,
and the heavenly bodies will be shaken.’

Then will appear the sign of the Son of Man in heaven. And then all the peoples of the earth will mourn when they see the Son of Man coming on the clouds of heaven, with power and great glory. And he will send his angels with a loud trumpet call, and they will gather his elect from the four winds, from one end of the heavens to the other.

Truly I tell you, this generation will certainly not pass away until all these things have happened.

I recently asked a group of friends ‘Which do you think are the hardest sayings of Jesus?’ I was expecting one or two thoughtful suggestions – but what followed was a long list, with some animated discussion, of all the difficult things Jesus said. That in itself is something worth pondering; whilst both the teaching of Jesus – and the whole of the Bible – includes many things that are easy to understand, which warm our hearts and lift our souls, alongside these are many other things that are very challenging!

But some of Jesus’ sayings are hard to understand simply because we are at a distance from the world in which Jesus was living and teaching, and sometimes the history of interpretation leads us astray as well.

In the middle of his ‘end times’ teaching in Matthew 24–25, Jesus makes this claim:

‘Truly I tell you, this generation will certainly not pass away until all these things have happened’ (Matthew 24:34).

This isn’t just a difficult saying; C. S. Lewis called it ‘the most embarrassing verse in the Bible’. It completely undermines the use made – every day during the pandemic it seems! – of ‘end times prophets’ telling us we are ‘in the last days’. And it has led generations of scholars over the last 200 years to believe that Jesus was a deluded apocalyptic prophet whose predictions failed to come true, so that he died a failure.

But we usually fail to notice what Jesus is actually speaking of here. The ‘tribulation’ he refers to in Matthew 24:9, 21 and 29 happened with the destruction of the Jerusalem temple in AD 70. The ‘powers of heaven’ that are shaken (verse 29) refers to the radical shift brought about by the exile of the Jewish people and the preaching of the gospel (Peter says exactly the same about Pentecost in Acts 2:20). And ‘the Son of Man coming on the clouds of heaven’ indicates Jesus coming to the throne of God from the earth, not the other way around, as we can see from its source in Daniel 7:13. This section is all about Jesus’ exaltation and the gospel being preached – not Jesus’ return!

And this gives us great comfort. First, we realise that whatever ‘tribulations’ we are facing, we are not the first and we are not alone. Christians before us have faced all this, and often much worse. But, secondly, whatever else is happening, Jesus is on the throne with God. He is the rightful king we can trust with our lives, and one day he will return and all will come under his just and holy reign. 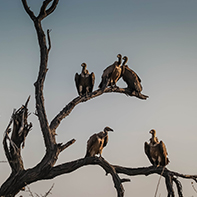 Where There is a Body, There the Vultures Will Gather | The Hard Sayings of Jesus (2/5)