Encounters with Jesus | The Adulterous Woman

Jesus bent down and started to write on the ground with his finger. When they kept on questioning him, he straightened up and said to them, ‘Let any one of you who is without sin be the first to throw a stone at her.’ Again he stooped down and wrote on the ground. At this, those who heard began to go away one at a time, the older ones first, until only Jesus was left, with the woman still standing there.

It’s a story both terrifying and joyful to imagine. It’s terrifying because it’s certain that the woman will be stoned according to the law, but it is joyful because it takes an unexpected twist. The story of the adulterous woman is good news for those who may feel rejected and excluded over their own moral failings.

As the woman is handed over to Jesus, her accusers address him as ‘teacher’ – confirming beyond doubt that he is qualified for this sort of thing and will know exactly what to do.

‘This woman was caught in the act of adultery’ they announce, and ‘in the Law Moses commanded us to stone such women. Now what do you say?’

I wonder if the woman felt written-off at this moment, perhaps as locals stood by staring and pointing. Although her accusers had fists of stones, it must’ve been the force of their words that she dreaded most. But when Jesus is asked for his word on the matter, he subverted their expectations. After stooping low and writing on the ground, he invites them to consider their own imperfections and need of salvation.

In bringing the woman forward, it is unmistakable that her accusers had crossed the line, since in such circumstances ‘both the adulterer and the adulteress are to be put to death’ (Leviticus 20:10). Although trapping Jesus was the aim of this gathering, in the end the group are compelled to leave one-by-one.

In an age where gossip and taking pleasure over another person’s failings can seem commonplace, there is nothing fruitful about self-righteousness and judgementalism. Whether it’s on the news, social media, or on your frontline, scapegoating can lay the groundwork for a false sense of community. We’d do well as Christians to remember that the only foundation for true communion is sacrificial love – for it is in willing the good of the other that we are built up as individuals.

In letting the woman go free, Jesus wasn’t making light of the law, since he would be carrying the weight of her sin not long after this encounter. His response to her failure was compassion, since it is in suffering on behalf of others that Jesus sets them free. May we choose to be agents of compassion, and not judgment, on our frontlines this week.

What might it look like for you to prioritise sacrificial love and compassion on your frontlines this week? Join the conversation in the comments below. 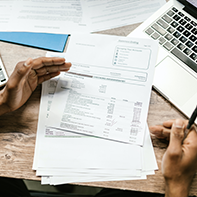