Encounters with Jesus | The Woman of Samaria

Now he had to go through Samaria. So he came to a town in Samaria called Sychar, near the plot of ground Jacob had given to his son Joseph. Jacob’s well was there, and Jesus, tired as he was from the journey, sat down by the well. It was about noon. When a Samaritan woman came to draw water, Jesus said to her, ‘Will you give me a drink?’

The stained-glass window situated above the sanctuary in St Peter’s Church, Vere Street (now the headquarters for LICC) preserves a nineteenth-century depiction of Jesus’ encounter with the woman at the well. At the time of day when no one was expected to be around, and as the woman is preparing to draw water for herself, Jesus is present and gesturing towards the water jar secure within her grasp.

According to the passage, the woman’s hesitancy to draw water is explained by the author’s note that ‘Jews do not associate with Samaritans’. Although this might appear ambiguous and even bizarre for modern readers, the NIV’s alternate rendering that Jews ‘do not use dishes Samaritans have used’ might provide some illumination in historical context. The importance of food laws and rites among various religious groups suggests they may have functioned as identity markers in the ancient world. Sharing resources among those outside a covenant community could result in making one ceremonially unclean.

Although religious obedience initially excuses the woman for her inhospitality, the act of withholding may be indicative of her felt disintegration. Not only is she set apart with respect to religious obligations, but she is also isolated from her own community. Cultural conventions would have provided a further dimension to her plight too, since it was socially unacceptable for men and woman to converse publicly.

Not only was Jesus breaking boundaries through initiating their conversation, he was also mending the rift between their respective communities. Despite their religious, racial, and gender differences, Jesus’ request functions as an invitation into a new life – one marked by reconciliation through the forgiveness of sins.

In asking for a drink of water Jesus invites the woman to become generous with her own resources, perhaps showing her that the path towards integration includes the release of one’s grip over material provisions: it is in giving away that the human person discovers real abundance since it is for communion that we have been made.

Despite living in a highly connected world, many people today still experience loneliness and isolation. Polarisations can have the same impact too, whenever used to identify groups or individuals. In what ways might you become generous this week on your frontline? How might you share your resources with others? How might you become a picture of the divine life? 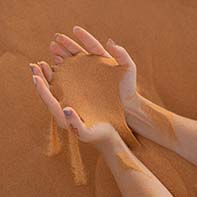 Encounters with Jesus | The Adulterous Woman (2/4)