George Floyd is the latest in a long line of black people who, in recent years, have died at the hands of the police in America. This has led to a global outcry against racism, demanding fairness and equality in interpersonal relationships. But more than this, justice requires us to root out and re-order any system, structure, or narrative which privileges white people over people of colour and their cultures, norms, and perspectives.

Many consider racism against black people to be an American problem, but Britain’s imperial history has given us our own particular brand. While many white people would publicly denounce overtly racist behaviour, many of our systems are inherently racist and some people remain willing and conscious participants in them.

That’s why it’s not enough to check our unconscious biases. We must be determined to be ‘anti-racist’, to work against the status quo wherever it disadvantages black people. This is fundamentally theological: affirming the inherent dignity of all people created in God’s image.

In the UK, recent research demonstrates that black children are twice as likely to live in poverty than white children. Black people face discrimination in employment and health care. They are more likely to be stopped and searched by police, to get sentenced to prison time and to be given longer sentences than white people. As a country, we have our own stories of excessive force and of the deaths of black people in police custody. Stories that do not end with justice.

These realities are well-known by black people in the UK, including black Christians. Black Brits share the pain of African-Americans suffering under the weight of the same sin and injustice, the same racism.

Yet, the lack of solidarity displayed by many white Christians and leaders has deepened this pain. The unity and witness of the church – as an institution and through its members in society – depend not just on shared faith, but also on shared love and shared burdens. The racial inequities of our churches often fail to speak prophetically to the world – this is a week for lament and repentance.

For those moved to compassion, it’s also a time to listen, learn, and practise solidarity with your black brothers and sisters. Action is the way we bring about a new world. A world that cares, principally, for the ‘least of these’. 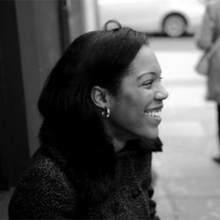