Unity in Diversity | Longing for the Future Eden

And the LORD God said, ‘The man has now become like one of us, knowing good and evil. He must not be allowed to reach out his hand and take also from the tree of life and eat, and live forever.’ So the LORD God banished him from the Garden of Eden to work the ground from which he had been taken. After he drove the man out, he placed on the east side of the Garden of Eden cherubim and a flaming sword flashing back and forth to guard the way to the tree of life.

An American musician, Phil Wickham, has a song called ‘Eden’ that I think is brilliant.

It is written in the voice of Adam expressing a strong longing to go back to Eden, stating, ‘I want to see you [God] face to face, where being in your arms is the permanent state, I want it like it was back then, I want to be in Eden.’

It is this Eden that Genesis 2 describes for us – God’s creation as it should be. The universe of Genesis 2 was a perfect and harmonious whole, a true embodiment of unity and diversity working just as God intended it to be. By the time we get to Genesis 3, though, that perfect universe has been ruptured, evil has entered the world, and the harmony has been thrown into disarray.

After the fall, this very gift of diversity that made the universe work became a problem. The harmony that held everything together was disrupted when an evil spiritual kingdom pierced the universe. Difference and variety, which had originally made everything beautiful, became a threat. Instead of exercising dominion over the earth, humans started to dominate one another. Lies, jealousy, conflicts, and murder became part of our existence.

Divisions and fragmentations within human society ensued. Even unity itself became corrupted. As seen in the story of the Tower of Babel in Genesis 11, humans united to assert themselves against others, something God permanently resolved by scattering humanity around the earth.

Unity, in the context of human domination over one other, often gets reduced to uniformity – unity on the terms of the dominant. Disunity shows itself in many forms – from war to the segregation of our faith communities, from the dismissing of divergent voices to create echo chambers to the human tendency to compete and not collaborate. Even the universe is disturbed by the fall. Its part in the holding of the harmony of all creation has been marred by natural disasters affecting human life.

I stand with Phil Wickham. I want to be in Eden, but I long for the new Eden that is the Kingdom of God – the spaces in and around us where the Spirit of God reigns, where both humanity and creation will eventually be restored to their original harmony, and diversity will be a blessing.

We can begin living out that future reality today by resisting division and seeking harmony. How can you play your part in restoring God’s harmony in the world this week?

Join the conversation in the comments below. 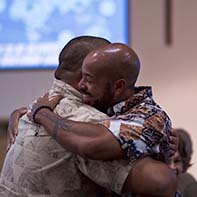 Unity in Diversity | The Body and Its Members (3/3)