The Abuse of Power | Addressing the Power Balance

Now Israel loved Joseph more than any of his other sons, because he had been born to him in his old age; and he made an ornate robe for him. When his brothers saw that their father loved him more than any of them, they hated him and could not speak a kind word to him. Joseph had a dream, and when he told it to his brothers, they hated him all the more.

Abuse of power is the misuse of a position of power to take unjust advantage of individuals, organisations, or governments.

The Genesis story tells how Joseph is alienated by his brothers as he holds the position as the favourite son, publicly demonstrated when his father presents him with a beautiful robe. Like many who are thrust into an elevated position, Joseph doesn’t deal particularly well with this limelight as he flaunts his power as ‘the dreamer’ over his brothers.

So, Joseph’s brothers use their number and strength to get rid of him as they strip him of his robe, throw him into a pit, and sell him to the Ishmaelites. He ends up in Egyptian slavery and is bought by Potiphar, one of Pharoah’s officials who also favours him. However, he’s imprisoned when his master’s wife abuses her power and falsely accuses him of a sexual crime. His time in prison is extended when he is forgotten by the chief cupbearer.

Although it takes time for Joseph to realise it, these trials show how God has been preparing him for an important role that will bring his God-given dreams to fruition.

Having gained Pharoah’s admiration for accurate dream interpretation, Joseph finds himself as second-in-command to Pharaoh and becomes prime minister of the land with a world-wide famine approaching. Joseph is back in an elevated position and he’s once again holding the power.

The story of Joseph is dramatic as he faces injustice, betrayal, and family breakdown, as well as having to lead and navigate through enormous social challenges. Through his journey, the power dynamic is constantly shifting. Yet eventually, Joseph becomes the first person in this long series of complex events to use his power to forgive, bless his brothers, and restore relationships. He demonstrates how it is those in a position of power who need to be the first to make the change. We cannot expect those who are at the weaker end of the power dynamic to overcome those who abuse power.

An unjust imbalance of power isn’t always obvious and can be created in relationships through positional authority, ego, status, money, age, and education. It can be easier for us to recognise the abuse of power in the high-profile cases that regularly hit our headlines, but it’s important that we are also alert to unjust power imbalances in our everyday lives in our homes and families, in our workplaces, schools, and in our churches. We need honest reflection about the power we each hold so we can steward that wisely for the good of others.

Think about your frontlines. How might you ensure there is an appropriate power balance in your relationships? Do you ever witness position, ego, status, money, age, or education being used to hold power over another?

Join the conversation in the comments below. 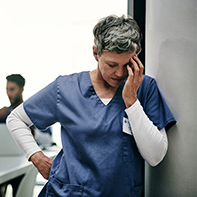 The Abuse of Power | When Power and Authority Corrupt 2/4