Sex and Scripture | In the Beginning

‘Haven’t you read,’ he replied, ‘that at the beginning the Creator “made them male and female,” and said, “For this reason a man will leave his father and mother and be united to his wife, and the two will become one flesh”? So they are no longer two, but one flesh. Therefore what God has joined together, let no one separate.’

So God created mankind in his own image, in the image of God he created them; male and female he created them. God blessed them and said to them, ‘Be fruitful and increase in number; fill the earth and subdue it. Rule over the fish in the sea and the birds in the sky and over every living creature that moves on the ground.’

The man said, ‘This is now bone of my bones and flesh of my flesh; she shall be called “woman”, for she was taken out of man.’ That is why a man leaves his father and mother and is united to his wife, and they become one flesh.

After a term-long focus on how to follow Jesus in our hyper-sexualised age, it seemed right to dive into what Scripture says about what it means to be sexual beings. So we’ve asked Dr Andrew Goddard – an assistant minister, ethics lecturer, researcher, and consultant for the Church of England’s Living in Love and Faith project – to help us do just that. Over these four weeks, he reflects on the living Word and what it looks like to live it out on our frontlines.

Disagreements over marriage, sexual ethics, and the Bible are nothing new among God’s people. And in working out our response, there’s no better place to start than with Jesus.

In Matthew 19, we have Jesus’ fullest teaching on marriage. It arises because of different views about how to read Scripture, and different practices around when Jewish men could divorce their wives. Questions of divorce and remarriage are still of vital importance, but today our differences over same-sex marriage – both among ourselves as Christians and between traditional church teaching and society’s beliefs and practices – are most contentious. So what can we learn from Jesus’ approach?

Rather than arguing about how to interpret the standard proof text in debates between other rabbis, he points back to the opening two chapters of Genesis and God’s purposes in creation. In so doing, he made these chapters central to the centuries of Christian thinking about marriage and sexual behaviour which many now question or reject.

It should therefore perhaps not surprise us as much as it often does that radical reconfiguration of what it means to be male and female has quickly followed widespread social rejection of marriage as a male–female union.

A society’s practice of marriage and its vision of what it means to be human will move together. In conversation with someone about different understandings of marriage and sexuality, it’s often therefore helpful to dig deeper into views about who we are and what is good for us as human beings and communities.

A major challenge we face as Christians is how we continue to witness to the goodness of God’s purposes in creation while recognising the reality of living in a broken, fallen world. How should we respond to what Jesus speaks of as the hardness of human hearts? There is again no better place to look than Jesus. He shocked many with his clear, uncompromising teaching, but also with his grace and forgiveness captured in his words to the woman caught in adultery: ‘Neither do I condemn you, go and leave your life of sin.’

On frontlines with many differing views of sexuality and marriage, what words and actions would help you live the Jesus way, full of grace and truth? Join the conversation in the comments below. 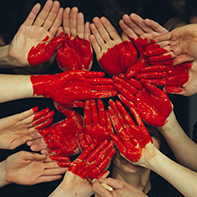 Sex and Scripture | Sin and the Fall 2/4