Mark: Living the Way of Jesus in the World | Free to Give

Jesus sat down opposite the place where the offerings were put and watched the crowd putting their money into the temple treasury. Many rich people threw in large amounts. But a poor widow came and put in two very small copper coins, worth only a few pence.

While he was in Bethany, reclining at the table in the home of Simon the Leper, a woman came with an alabaster jar of very expensive perfume, made of pure nard. She broke the jar and poured the perfume on his head.

Passover was two days away and Jesus was reclining at the dinner table of Simon, nicknamed ‘the leper’. It was a tense time in Jerusalem. Passover celebrated the Israelite exodus from Egypt, liberation from oppressors, and here they were, a nation living under Roman occupation. These were Jesus’ final days before his trial and execution. Preparations for Jesus’ arrest were underway and immediately following this episode Mark will recount the Last Supper. The cross beckons.

No wonder Mark wanted to record the moment when a woman broke the neck of her alabaster jar and anointed Jesus – as preparation for his burial, Jesus declared. It was a lavish and subversive act, signalling her complicity in the Jesus movement and pointing to the deep work of the Messiah still to come.

It was also sacrificial, not only financially but also in terms of her reputation and vulnerability to rebuke. A couple of chapters earlier, Mark recorded another woman’s extravagant sacrifice – a poor widow gave all she had to the temple. The amount was meagre, but Jesus drew attention to her extraordinary generosity.

In between these two episodes stands chapter 13. Sitting on the Mount of Olives looking over to the temple buildings, Jesus talked privately with his closest disciples about what lay ahead. The temple would be razed. It’s likely that his words point to the traumatic destruction of the temple in AD 70. But a new ruler was on the way, Jesus affirmed – the Son of Man. His words evoked Daniel 7:13 – the Son of Man coming from earth to heaven, vindicated after his suffering, and taking up all authority in heaven and on earth.

They were turbulent days that Passover week in Jerusalem. Recounting them some years later, Mark also lived in tumultuous times. Facing persecution, the early church needed him to tell this Jesus-story afresh. They needed to be reminded that it was anchored in God’s unfailing faithfulness, recounted in the shadow of the cross, marked by the radically alternative character of the kingdom of God, and lived out in the power of the resurrected life of Christ.

In different ways, the women bear witness to this God-story: faith, hope, and love freeing them for extravagant generosity, costly sacrifice, and the counter-cultural life of the people of God. As followers of the risen Lord, how will we testify to the way of Jesus in our contested times?

How are you learning to live the way of Jesus on your frontline this week? Join the conversation in the comments below. 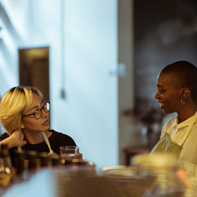 Mark: Living the Way of Jesus in the World | Transforming Power (4/4)

The final title in the Gateway Seven study series, Mark: Living the Way of Jesus in the World, is available here.

And go deeper in Mark’s Gospel with our brand new 40-day devotional journey. Sign up now to get it via email or follow along on YouVersion.