The words of Amos, one of the shepherds of Tekoa – the vision he saw concerning Israel two years before the earthquake, when Uzziah was king of Judah and Jeroboam son of Jehoash was king of Israel.

‘The LORD roars from Zion
and thunders from Jerusalem;
the pastures of the shepherds dry up,
and the top of Carmel withers.’

Which of the minor prophets would you most like to have at your birthday party?

There are 12 overall and, to be quite honest, I can’t imagine any of them would be particularly fun at such a gathering. This is certainly true for Amos: at first glance, he seems judgey, ragey, and overall a bit of a party-pooper.

But spend any time in the book of Amos and you get the sense of a man burdened – burdened by grief, by God’s anger, by a sense of despair at the hypocrisy he sees around him.

Amos is a shepherd. He wasn’t, like many others of his time, a ‘professional prophet’. He likely spent his days thinking about sheep and cattle and figs. I would imagine he had absolutely no desire to speak God’s harsh words of judgement to Israel.

We don’t learn anything about the moment of Amos’ calling to become a prophet – we hear only the words the Lord has given him and read descriptions of the visions he has received.

But pause with me for a moment and imagine yourself in Amos’ position: an ordinary person, no sense of calling to being a prophet, no family history of speaking truth to power… and then, one day, the word of the Lord comes to you. You know the words are not for you personally, but instead are a message that must be shared.

What do you do?

Obedience is costly: we aren’t told what Amos gave up to be a prophet. We don’t know what persecution he might have suffered as he spoke truth to power. What we do know, however, is that the words of the Lord weighed so heavily on him that he couldn’t not share. He couldn’t not obey.

Amos was an ordinary guy with an ordinary life. And then God placed his word on his heart, and Amos obeyed.

We, too, are ordinary people with ordinary lives. And we, like Amos, can make a difference where God has placed us: through ministering grace and love to those facing challenges, or being a mouthpiece for truth and justice at a time when it would be easier to remain silent.

As we journey through Amos’ words over the coming weeks, I hope and pray that we, too, will find ourselves changed and unable to keep silent because of it.

How can you make a difference on your frontline? Join the conversation in the comments below. 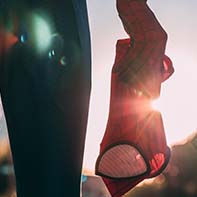