Worshipping in All of Life | In the Wilderness

For the director of music. To the tune of ‘Do Not Destroy.’ Of David. A miktam. When he had fled from Saul into the cave.

for in you I take refuge.
I will take refuge in the shadow of your wings


until the disaster has passed.

On the run from Saul in the wilderness, fearing for his life and hiding in caves, David is hated and hunted prey. Naturally, he doesn’t hold back from telling it like it really is. It’s a ‘disaster’. ‘I’m in the midst of lions’, men armed to the teeth have ‘spread a net’ and ‘dug a pit in my path’. His fear is real and raw. This is David dealing with God in life-threatening circumstances, separated from places and people he loves, hidden away, his sense of purpose challenged and future uncertain. Sound a little familiar right now?

A soldier and leader under pressure, David’s response is immediately God-ward:

‘I cry out to God Most High
to God, who vindicates me.’

In the Bible, the wilderness is always a place of testing, tempting, and training, an immersion in the mystery and greatness of God. Psalm 57 helps us see that David’s decision to take refuge in God was less about hiding in the back of a cave and more about choosing to trust God with his life – all of it. His wilderness years trained David to see himself and his context with fresh eyes, to spot God in unexpected places and people. Like Saul.

When Saul entered that cave in response to a call of nature (1 Samuel 24), alone and vulnerable, it was the perfect opportunity for David to rid himself of his problem once and for all. How tempting. How justified he could have felt, acting on the urgings of his men. But David saw Saul differently, not first as his enemy, but rather as the Lord’s anointed one. So, despite his own youthful anointing as future king, David didn’t take his future into his own hands, choosing instead to trust God’s ways and timing, his faithfulness and justice. That moment in the cave exposed David to God’s presence and defined the wilderness on God’s terms, not Saul’s.

David’s worship starts where it so often does for him – in a real-life, desperate mess. But it doesn’t end there. For there was another story going on too – a God-story about love and faithfulness that was as true for David as his terror, and which freed him to come alive to God in the midst of danger and uncertainty… and sing:

‘Be exalted, O God, above the heavens;
let your glory be over all the earth.’ 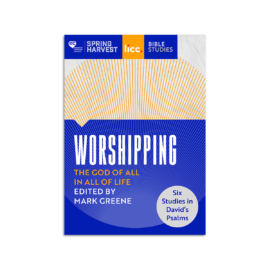 Dive deeper into the Psalms

Be inspired by David's example of whole-life worship with our new Bible study, Worshipping the God of All in All of Life, produced in partnership with Spring Harvest. Get your copy here - perfect for individual study or your next small group series. 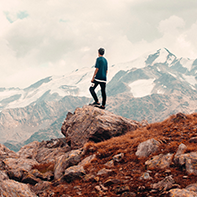 Worshipping in All of Life | Standing Firm (3/3)