On a grey and dreary Monday afternoon back in February 2016, Andy Flannagan, Noel Robinson, and I gathered in the chapel at St John’s Hoxton (where I serve as Vicar) for a song-writing session. Andy had been approached by the Cinnamon Network with the suggestion that he attempt to write a ‘civic hymn’ that could be used beyond the walls of the church to help Christians express concern for the common good of their neighbourhoods and nations. This was not just motivated by a concern for Christians to be involved in social justice, but also to express the idea of whole-life discipleship and whole-life mission. Our aim was to write a hymn that would help Christians realise their calling and vocation to work for the building of God’s kingdom wherever he has placed them.

The chapel is small and functional, not the most aesthetically inspiring location really, but furnished with piano, guitars, flip charts, and plenty of coffee, we began to set about the work of writing the song that would eventually bear the title ‘We Seek Your Kingdom’.

Despite the dreary weather, we were feeling hopeful and inspired at the prospect of writing something that would stand in the long Christian tradition of striving for social justice, civic engagement, and the common good. This tradition believes that every Christian can make a difference to our common life by considering how we can bring our faith in Jesus, and our commitment to loving God and loving neighbour, into our everyday lives – wherever we find ourselves working – in business, education, raising families, supporting communities or anywhere else.

St John’s Hoxton stands in this tradition, and plays host to the offices of Christians on the Left, part of Christians in Politics, and the church is a member of Citizens UK, working for local transformation and neighbourhood renewal through community organising. Hoxton itself has an interesting history of involvement in Christian faith and politics: in the 1790s, the former slave-trader and hymn-writer John Newton lived in Hoxton, and was visited regularly by William Wilberforce, as he sought to rally support for the abolition of the transatlantic slave-trade.

With this heritage in mind, we set about the task of writing words that would offer praise and worship to God, while at the same time evoking and invoking a manifestation of the kingdom of heaven in our midst. The 19th century Christian socialist, FD Maurice famously declared, ‘the kingdom of heaven is a present reality which is set to transform the face of the whole earth’. We hoped that the words we wrote would articulate something of the scope and reach of the kingdom of heaven – so that we might collectively offer in worship every part of our human society to God for his transforming touch.

The process of writing the hymn was fascinating – there was a beautiful synergy in the gifts we each brought: Noel with his poetic lyricism for worship; Andy with his passionate convictions about the need for Christians to engage with all spheres of public life; me with my Anglican liturgical sensibilities, and my concern that our worship and action be rooted in repentance, discipleship, and the formation of Christian character in our lives.

We agreed from the outset that if this was to be a ‘civic hymn’ that could be sung in public events even by those who were not practising Christians or had no experience of churchgoing, then it had to be a familiar tune from national life. We considered re-using the tune of well-known hymns of the church such as ‘Amazing Grace’ or ‘How Great Thou Art’. But we soon landed upon one hymn tune that was firmly embedded in the life of our nation: ‘Abide with Me’.

‘Abide with Me’ in its very title draws upon the biblical language of John 15, but more importantly, the tune is embedded in the public consciousness due to its use at the FA Cup Final since 1927. Any football fan in England at least will most likely have heard the first and last verses of the hymn sung around 15 minutes before kick-off at the annual FA Cup Final. Whether or not they know the hymn, the tune will be familiar.

Equally, the hymn and tune shot to national prominence when performed at the opening ceremony of the 2012 Olympics by Emeli Sandé. In an extraordinary festival of colour and light, and in the context of a celebration of British national life, a quiet moment of worship occurred as Emeli Sandé sang – I can’t possible know for sure, but I suspect the nation collectively prayed for a moment.

Having settled upon a tune, we started collating words, phrases, and sentiments we wanted to express with the song on flipchart paper and laptops. Noel was finger-picking on his guitar almost the entire way through – as though he could only think creatively about the words when his fingers were occupied on the guitar fretboard!

As the verses came together, we saw some structure forming: the opening two verses were an invocation of God’s presence throughout every sphere of human society. They served as an invitation – an expression of our desire for God to be present and active 24/7, in every moment of every day, week, and year. They expressed the words we pray daily: ‘your kingdom come on earth as in heaven’. The hymn lyrics invite God to be acknowledged in our ‘frontlines’ – the places where we spend time with people who don’t know Jesus, whether that’s in our workplaces, with our neighbours or in our homes and social networks.

The words expressed a longing for all our creative work to be in accordance with God’s economy – the logic of God’s household, God’s kingdom. Each of the verses conclude with that passionate prayer and petition – that God would ‘transform, revive, and heal society’.

As the opening two verses progressed to the next three, we wrestled more with how on earth that prayer might be answered – and recognised that the transformation of society must begin with the transformation of our hearts. For this reason, the next three verses focus on asking God to make us people of integrity; people who would repent and be transformed – ‘make us again what we were made to be’; people who would reflect God’s character in faithfulness and selflessness, whatever they do, wherever they are – at home, at work, in public, and beyond.

As we prayed and worshipped, we sensed the Holy Spirit with us to inspire us. It was remarkably easy to write together – I was honestly quite surprised by how quickly and easily the song came together. Each of us felt we could make meaningful and valuable contributions – and that the whole song together was greater than the sum of its parts. We finished the whole writing workshop within three hours, and aside from one or two tweaks agreed by email in the following 24 hours, ‘We Seek Your Kingdom’ was finished and ready to share.

As we finished our coffee, prayed for one another, packed away the guitars and flipcharts, we resolved that we would meet again to write together. Perhaps predictably, we haven’t! But that one three-hour session, five years ago, gave birth to a song we hope will inspire other Christians to connect their Sunday faith to their weekday life. We hope it will inspire Christians to figure out how they can be involved in God’s mission on their ‘frontline’ – in their places of daily occupation. We hope that Christians, as they worship God with this song, will be inspired to go out into the world and seek God’s kingdom in every sphere of life – and that God would hear our prayer expressed in worship and that he would indeed ‘transform, revive, and heal society’. 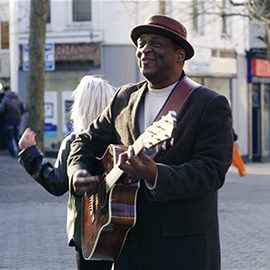 We Seek Your Kingdom

Watch ‘We Seek Your Kingdom’ - a new whole-life worship song to the tune of much-loved hymn ‘Abide With Me’. Written by Noel Robinson, Andy Flannagan, and Graham Hunter, it inspires us to see our daily tasks through God’s eyes – and live out the prayer ‘your kingdom come’ in every part of life.