‘This is what the Sovereign LORD says: although I sent them far away among the nations and scattered them among the countries, yet for a little while I have been a sanctuary for them in the countries where they have gone.’ […] They will return to [the land] and remove all its vile images and detestable idols. I will give them an undivided heart and put a new spirit in them; I will remove from them their heart of stone and give them a heart of flesh. Then they will follow my decrees and be careful to keep my laws. They will be my people, and I will be their God.

The trauma of displacement stamps itself on the visions and sayings of Ezekiel. He even acts out its humiliation and horrors in his own body, becoming a living demonstration of God’s message to those in exile.

That message is poignantly captured in the vision recorded in chapters 8–11 of his prophecy. Ezekiel sees judgment brought on those practising idolatry and perpetrating injustice in the temple and Jerusalem, before then witnessing the sad departure of God’s glory from his sanctuary and holy city.

On the face of it, not the most encouraging message!

But it was one the people needed to hear. Because, for all its sombreness, it insists that the Lord is in charge. God isn’t too weak to stop Babylon defeating the nation and destroying the temple. In fact, it’s the mysterious path he has chosen. It’s part of his larger plan to purify the people and restore his presence among them.

That’s why even this darkest of moments is accompanied with a promise of renewal on the other side of judgment. While God has left the temple, he has not abandoned his people in exile, and promises to be a ‘sanctuary’ for them there. What’s more, he’ll bring them back, give them new hearts, and restore them to a life of service.

Like other sufferers of traumatic events, Ezekiel’s hearers needed a way to reweave their experiences into a larger, more-encompassing, life-giving plot. Ezekiel’s message offered a way for them to understand their displacement within a story which brought together past, present, and future in the light of the Lord’s work – not only in their lives but for the sake of the world in which they were called to live.

God’s promises to us have a way of doing that.

For us, too, trauma can come in different shapes and sizes. For us, too, is the reminder that God’s purposes will never be derailed by the Babylons of this world, whatever form they take. For us, too, is an assurance that in our deepest need, we are secure in him. Even if his hand leads us into exile, he will be present with us there, and will one day bring about our full and final restoration. 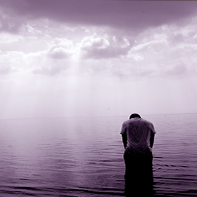