Back to Making Disciples for Everyday Life

As someone involved in church leadership, chances are you already have plenty on your plate. Then you start thinking about trying to shift the culture within your church to better encourage whole-life disciples. So, you begin to ask yourself, ‘it’s important, but does whole-life disciplemaking really, really matter?’

The folk at Christ Church, Downend, think the answer to that question is ‘yes’.

Diane found herself on a noisy moving school bus, working out the best way to confiscate an iPad from a potentially volatile child. With the deft use of a sporting metaphor about the importance of adhering to rules, the boy handed it over without any drama.

Rob found himself buying flowers for an elderly neighbour, when his only previous contact with her involved him being on the business end of a rebuke regarding his parking. He ended up singing at her funeral.

Martin found himself spending his retirement years looking after his dear wife, who lives with dementia. He grew in grace and shared his faith with others as he did so.

Whole-life discipleship matters because God’s people – people like Diane, Rob, and Martin – find themselves in places and situations where they can grow more like Jesus, and where they can demonstrate the reality of Jesus to others. These days, they feel affirmed by the church community in what they are doing in their daily lives, and they are better equipped to follow Jesus into whatever each day might bring.

It wasn’t always like this at Christ Church Downend.

Anita Dobson (now head of their ‘discipleship for all ages’ ministry) explains how just a few years ago, they were suffering from BCB: Busy Church Burnout. They were doing all the things a ‘good’ church should do, but ‘without many noticeable signs of the kingdom advancing.’ It felt like so much of her time and energy went into persuading people to volunteer for things, which left the congregation between the rock of frantic busyness and the hard place of guilt.

She was frustrated by this. She saw the limitations of this approach: ‘How do you as a church leader relate to someone who hasn’t got the time or capacity to help you run stuff at church, and who isn’t in a pastoral crisis of some kind?’

Then something changed. The vicar, Jo Vickery, stumbled upon some materials about whole-life discipleship, which led to a conversation with Neil Hudson and Tracy Cotterell from LICC. ‘Deep within me was a yearning to respond to Christ’s Great Commission in the context of the local church. I’d been trying to do that for many years since I was ordained in 1984. Now here was an approach that placed tools in my hands and gave me the “how to” handbook I couldn’t find anywhere else.’

Deep within me was a yearning to respond to Christ’s Great Commission in the context of the local church. I’d been trying to do that since I was ordained in 1984.

Whole-life disciplemaking matters because it furthers the mission of God.

Along with his team, Jo began to cast the vision. No longer would the church operate as a purveyor of religious services; it would first and foremost be a community where disciples get shaped and strengthened. Pennies began dropping… and the culture of the church began to change.

Anita stopped viewing people as potential volunteers, and started viewing them as disciples, ‘people learning to follow Jesus and make other disciples by sharing their faith.’ She started to ask new questions. In people’s daily lives, ‘What pressures, what opportunities do they face? How can I encourage them to see how God could – and may already be – working through them to further his kingdom? What if I invested more time and energy into that learning process?’

As you might expect, this new perspective came as a great relief to some disciples within Christ Church. They were already serving God out in the world, in places he had called them to make a difference. They wanted that to be recognised, to be encouraged, and to be equipped for these ‘ordinary’ contexts.

Realising the discipleship and missional opportunities everybody has in their everyday lives, and desiring to help them as much as possible, the church adopted a new tagline: ‘Learning to live the life.’ But as even the least cynical of us know, a new badge doesn’t always result in new behaviour.

Here, though, things went much deeper than a rebranding exercise. Increasingly, whole-life discipleship shapes every aspect of the church’s life, from baptisms to budgets, from the first sentence uttered by the service leader, to the last.

Even on their website, as an enquirer you are encouraged to share your ‘passions, hobbies, work and commitments so that we can pray for you and help you find ways to be fruitful wherever God has placed you’.

One of the fears church leaders sometimes have about putting so much emphasis on people’s Monday-to-Saturday lives is that the importance of Sunday will diminish, and they’ll see congregants attending fewer services. In Anita’s mind, the opposite is true. ‘It’s my belief that when people truly understand whole-life worship Monday to Saturday, it will increase their hunger to gather in worship on a Sunday, not drive them away.’

You see, if God’s people begin to understand they’ve been placed in a unique position wherever they are right now, and that God wants them to play a part in his great mission there, they are going to feel honoured, valued, and needed. They’re going to be more inclined to turn up on a Sunday if they see how that time fits in with what God is doing in all of life. Hopefully, they’ll see how they can support and encourage one another as brothers and sisters working on a shared mission. And they’ll want to bring their praise and adoration to the God who is with them in all things.

Whole-life disciplemaking matters because it increases the value of the time Christians spend together.

She underlines the importance of focusing on people’s whole lives by telling a story about what can happen when we don’t. Anita has a friend who used to belong to a church community. To start with, she really enjoyed attending services. She loved learning about God and expressing her love for him through song. But after a while, she became disillusioned as she noticed a huge disconnect between what was said on a Sunday and what she experienced in her workplace during the week. It seemed so irrelevant. Eventually, she just stopped going. As Dorothy Sayers wondered, ‘How can anyone remain interested in a religion which seems to have no concern with nine-tenths of his life?’

At Christ Church, thanks be to God, they are seeing signs of fruit. Stories are coming through of disciples living differently on their frontlines,* of them being channels of blessing to others on their frontlines. There is increased recognition of how God is already at work. Newcomers to the church notice the difference. Esther, a professional musician who recently joined said this: ‘I love the way CCD focuses on encouraging us to confidently live out our faith in the world, wherever each one of us might be. The way the songs, images, testimonies, and sermon fit together consistently challenges and inspires me for the week ahead.’

So Anita is convinced by the importance of the body of Christ meeting together regularly, and the power this time can have in shaping us as whole-life disciples. In gathered worship, ‘we bring the week we had and the person we’ve been before the living God.’ It’s a time to repent where we’ve failed, to rejoice in the specific ways God has been faithful to us, and to go out into the week, filled with the Holy Spirit, on the look-out for where God might be at work in the coming week.

Like Jo says, ‘If it isn’t about the whole of life, what is it about?’

*By frontline we mean an everyday place where you live, work, study, or play and where you’re likely to connect with people who aren’t Christians.

Some things to try

Affirm day-to-day activities
Next time you lead or preach, make a conscious effort to say at least one thing that affirms what people do in their lives outside of church involvement.

Pray for your members’ everyday lives
Think about one or two people within the church you’ve interacted with recently. Where might they be or have been today? Take a few moments to pray for them, thanking God for who they are, what they do, and who they interact with.

Examine your role
Remind yourself that you are an equipper and encourager of
disciples. As you say this to yourself, how does that make you feel?

Some things to look at

Life on the Frontline: Meet Anne
This short video looks at the importance of equipping people for the whole of their lives through the lens of an ordinary Christian’s week.

The Great Divide by Mark Greene
An essay exploring the dangers of the sacred-secular divide for Christian mission and living, and a compelling alternative for how we might live more faithful and fruitful lives.

Imagine Church by Neil Hudson
In Chapters One and Two Neil begins to unpack the importance of equipping Christians for their day-to-day lives, and why the local church is central to that. We’ll reference the book more in other chapters, so we do recommend it!

Imagine Church Workshops
Join members of the LICC team as we share what we’ve learnt about how to create a whole-life disciplemaking church and help you identify next steps for your context. 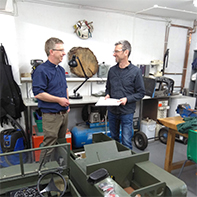 How do we learn about people’s lives?