‘The more I prayed about it, the more I felt that God was calling me to stay in the world of business.’

Chris Gillies, a businessman who still hasn’t got used to seeing his home country of Scotland lose at rugby, is telling me about the 36 years he spent working in financial services. Accompanied by a cup of coffee, we chat about his calling into a ‘secular’ workplace and his journey towards discovering what it means to be a Christian in business.

Having studied French and German and then trained as a chartered accountant, Chris spent five years working in London before moving away and into a job with the financial services company Allied Dunbar.

As he worked his way up the ranks over the next 36 years, eventually ending up in an executive role as the Chief Growth Officer for Global Life in the Zurich Insurance Group, he began ‘stupidly, Pooh-Bear like’ to form a theology of work.

With each new promotion came new challenges. Confronted with complicated business ethics, managing people, corporate responsibility, and community engagement, some of the biggest workplace discipleship questions became live issues for him. What does a Christian in business look like? How do you bring a godly perspective on tough business decisions? How do you steward things well?

But, he tells me, God gave clear guidance every step of the way: ‘increasingly, I began to see that there was a godly way of doing business that brought out the best in people and the best in business.’

Sometimes, however, he had to do very difficult things for the health of the wider company. One such situation came after the dot-com crash of 2002, where he was forced to close the internet bank he had built from scratch: ‘we had 200,000 customers and 370 staff, but we were a few years away from making a profit, and so we had to close.’

Chris was left with a choice: resign and ask someone else to shut it all up, or stick around and do it himself. As he prayed about it, he felt very clearly that God wanted him to stay: ‘you’ve given these people jobs and you’ve led them to this point, so you need to lead them now to finish well.’ So he resolved to do the ‘textbook business closure’.

What did that look like? It meant asking questions like ‘is the redundancy package fair? How are we supporting our staff with coaching and advice to help them find other jobs? How can we throw a really good party?!’

‘I had a list’, Chris says, ‘which included every single person we had employed, and documented whether or not they had found a job. Those who hadn’t got jobs we continued to support, demonstrating love and care to them as individuals.’ That was on top of treating the 200,000 customers well, walking them through the process of moving back to their old bank or finding a new one: ‘it was a really difficult time, but it was about doing it well, doing it in a way that honoured God.’

As we finish up our cups of coffee and prepare to go our separate ways, I ask Chris for his one piece of advice to someone starting work.  A few moments later, he echoes Jesus’ words: Love God and love your neighbour.

‘Loving God involves work’, he explains, ‘because God gave us a mandate to be fruitful and build a flourishing society. And every colleague in your workplace is your neighbour. Find practical, culturally relevant, and appropriate ways to love them.’ 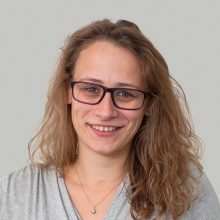