On one occasion an expert in the law stood up to test Jesus. ‘Teacher,’ he asked, ‘what must I do to inherit eternal life?’

‘You have answered correctly,’ Jesus replied. ‘Do this and you will live.’

But he wanted to justify himself, so he asked Jesus, ‘And who is my neighbour?’

In reply Jesus said: ‘A man was going down from Jerusalem to Jericho, when he was attacked by robbers […] Which of these three do you think was a neighbour to the man who fell into the hands of robbers?’

The expert in the law replied, ‘The one who had mercy on him.’

Jesus told him, ‘Go and do likewise.’

What’s the most uncomfortable question you’ve ever been asked? I doubt the expert in the law, a theologian, at the centre of this exchange with Jesus enjoyed being asked: ‘Which of the three was a neighbour to the man?’

It’s the theologian who starts the conversation by asking Jesus a question in order to test him. In response, Jesus asks a question of his own. The theologian answers correctly but, wanting to justify himself, can’t resist a follow-up, which he almost certainly regrets. Perhaps his question is really, ‘How little can I do and still fulfil the law?’

And so Jesus tells a story about four people, commuters perhaps, travelling from Jerusalem to Jericho. A man is attacked and left half-dead by robbers. Just by chance, a priest walks by. Surely this high official will help the injured stranger? Sadly not. ‘Typical,’ thinks the theologian; ‘What would you expect from a priest?’ Whilst the theologian is almost certainly a Pharisee, the priest in the story is probably a Sadducee. And Pharisees and Sadducees disagreed pretty fundamentally on what religion was all about.

The next person to walk down the road is another temple functionary, this time a Levite. Although less senior than a priest, he still has important responsibilities to fulfil. But help is not forthcoming from him either.

And thus the scene is set for a fourth and final person to walk down the road. Surely it’s time for someone like the theologian to come to the rescue? But no. Jesus has a surprise in store for our friend. It’s not a Pharisee, but a despised Samaritan, who stops, takes pity on the man, and cares for him.

It’s easy to imagine ourselves as one of the characters in the parable, but perhaps Luke’s account actually challenges us to cast ourselves in the role of the theologian who is focused on testing Jesus, and justifying himself. Perhaps we’re supposed to feel the theologian’s discomfort in responding to Jesus’ question?

Because Jesus demands that we recognise that even those who are hated and feared are to be seen as neighbours. Jesus’ way is often seen, not in those who think that they have the ‘correct’ theology, but in people and places we don’t expect. In such situations, the challenge of Jesus is to see what’s really going on and ‘Go and do likewise’.

How open are you to seeing God at work in people and places you don’t expect? Join in the conversation in the comments below. 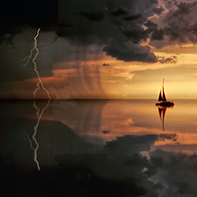