Anyone Know a Good Builder?

Bob the Builder is one of the most iconic tradesmen of our generation, working to get the job done with his friends Scoop, Muck, Dizzy, Roley, and… can you remember? Yes – Lofty!

Every week they helped build and transform community life and shaped the culture of construction for a generation of children.

All together now: ‘Bob the Builder, can he fix it? Yes he can!’ You’ll be singing that all day now. You’re welcome!

On 17 September it’s ‘National Tradesmen Day’. A day to honour and remember the women and men whose skills have helped build our country.

Following the Second World War, Britain was rebuilt by an extraordinary workforce of ordinary men and women. They were armed with shovels and trowels, tape measures and planes. An army of bricklayers, surveyors, carpenters, electricians, and civil engineers came in their thousands to shape the future of our country.

Leading the way in that revolution was Laing Construction. They built homes, factories, schools, and bridges, all to enable a nation to flourish once again following the ravages of war.

John W Laing and his company moulded the culture of construction in their generation. A Christian, Laing introduced holiday pay, a company pension, payments by results, and safety equipment like the hard hat. His character was godly too: he was known for his generosity and sense of fun. His workforce flourished under his leadership.

John Laing believed in ‘life abundant’ and he applied it to how he led his workforce and how his company carried out projects. His faith informed his work and shaped his daily practice.

Today we’re faced with monumental challenges of our own: climate change, a housing crisis, a health crisis, and national debt. But, like Laing, can we help build the future? Yes we can!

Moulding the culture of the building industry with all its flaws is a tough ask. However, God has placed Christians there to help build the future. Their work may help families flourish, enable communities to connect, and allow workers to thrive in the spaces they create.

So, on National Tradesmen Day, let’s give thanks and pray for the people who will help build our country through their daily work. Perhaps use these words to pray: ‘May the favour of the Lord our God rest on us; establish the work of our hands for us’ (Psalm 90:17). 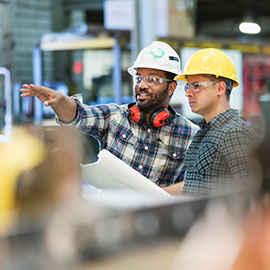 Building on the Rock: Christians in Construction

If you’re in construction or a similar sector, join us on 8 November to explore what it means for our work to be distinctive and transformative – and how we can showcase Christ in our words, actions, and tasks.