This is what the LORD says:

‘For three sins of Damascus,
even for four, I will not relent.’

This is what the LORD says:
‘For three sins of Israel,
even for four, I will not relent.’

Hear this word, people of Israel, the word the LORD has spoken against you – against the whole family I brought up out of Egypt:

‘You only have I chosen
of all the families of the earth;
therefore I will punish you
for all your sins.’

Do you think you’re better than most people?

In slightly less controversial phrasing: if you were to plot your morality on a chart, would you put yourself as above the average person? Studies suggest that you would: it’s been proven that people tend to believe they’re morally superior – more honest, more principled, and fairer – than the person next door.

Thousands of years before this concept was discussed in scientific journals, Amos was using it to make a point to the people of Israel. The first chapter and a half of Amos are made up of judgements on Israel’s neighbours – from the huge Syria right the way down to little next-door Judah.

Just imagine reading this as an Israelite, hearing God’s judgement being delivered on all those nations. No doubt you’d feel at least a little smug.

But suddenly, God – through Amos – turns his attention to the Israelites. And they are on the receiving end of a judgement three times the length of anything the other nations received.

Well, in the words of Spider-Man’s Uncle Ben: with great power comes great responsibility. And even more so when God is involved: Israel had been chosen by God to be different. They were God’s holy people; they had been given his law. He brought them out of Egypt and liberated them from bondage.

And yet, we discover, they are guilty too. Their sin has been seen by God, and he is angry. They have forgotten that their existence was supposed to be for God’s glory, to lead those around them to worship of the Lord. They were supposed to live differently from surrounding nations. But instead, they’ve just blended in.

Such hypocrisy is not an ancient sin of which only the Israelites were guilty. It is my sin, our sin, and arguably also the sin of the church at large today – individually and corporately.

Perhaps we can begin this year by doing something brave and naming our own failings before we point the finger at others. Acknowledging and repenting of our unforgiving attitude to another’s mistakes in the workplace, or our judgemental eye on someone else’s parenting.

Like it or not, we’re no better than anyone else. The only difference is that we have known forgiveness. That is why we can freely acknowledge our sin, because we know that – through Jesus’ sacrifice – it has been cast as far as the east is from the west.

Where is God calling you to acknowledge your own failings, and live more distinctly, on your frontline? Join the conversation in the comments below. 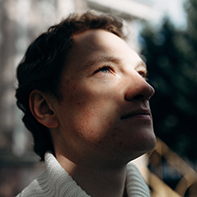