Business leader Joëlle Warren on why The Great Divide’s message of whole-life mission is more important than ever.

‘The words “ministry” and “calling” are often applied to people in paid Christian work, but I apply them to my role as a businesswoman. I want to encourage others to ask: “Where am I called, where do I minister?” It might be in the classroom. It might be in the swimming pool. For me, my frontline is in the boardroom of businesses in the UK.’

So says Joëlle Warren MBE, who founded and now chairs executive search firm Warren Partners. Her CV is extensive and varied: as well as working with boards across the public, private, and voluntary sectors, in 2019 she led the Crown Nominations Commission for the appointment of the Archbishop of York. She also serves as Her Majesty’s Vice-Lord Lieutenant for Cheshire. It’s fair to say she knows a bit about living out your faith in every sphere of life.

‘Jesus calls us to go and represent him out in the world,’ she says. ‘We’re sometimes sent to places where there’s darkness – if we as Christians aren’t shining his light, it won’t be shining.’

The idea that God has work for us to do out in his world might seem obvious. But for many Christians, it’s not something we hear clearly expressed in church. That’s why we at LICC published The Great Divide in 2010, challenging the lie of the ‘sacred-secular divide’ – the feeling among Christians that some parts of life (Sunday services, church activities) are important to God but others (work, study, sport, hobbies) are irrelevant.

Eleven years later, The Great Divide’s message has reached thousands of churches and helped release tens of thousands of Christians into frontline mission – not least when Scripture Union sent it to all 75,000 of their subscribers. Now, to build on that progress, The Great Divide has been updated and redesigned for a new generation. Joëlle spoke at the launch event in June – and doesn’t mince words when it comes to the sacred-secular divide.

‘In a recent meeting about a church project led by lay people, someone asked me: “Why is this project happening without a clergy representative? We need the grassroots of the church here!” I was shocked – it doesn’t get much more grassroots than the laity. We need a perspective shift on who the church is and where its mission takes place.

‘We all have a part to play in changing that culture. It’s easy to think: “I’m on the rotas for kids’ church and washing up, so I’ve done my bit.” Our churches need rota volunteers – of course! But the real challenge is to do your bit when you’re under pressure on Monday. That’s the call we’ve received as followers of Christ.’

Joëlle practises what she preaches. ‘I aim to instil Jesus’ command to “do to others what you would have them do to you” in the culture of my business, which is made up of all faiths and none,’ she explains.

‘For example, we ask for payment within 14 days. Do we always get that? No! But when we’re invoiced, we always pay within the agreed time. It costs us, but it’s the right thing to do. Our suppliers are treated as we want to be treated, and the relationships are really strong.

‘Similarly, the recruitment sector isn’t known for its moral values. When I first joined the industry, I was surprised at the number of lies being told. At Warren Partners, the rule is: we don’t tell lies. So, people can trust us, even if the news isn’t good.’

And, as Joëlle explains, it’s not just how you do your work that matters. The work itself can glorify God. ‘We’re put on earth to do good work. As a recruiter, uniting somebody with a job that’s good work for them is just fantastic! We’ve set concrete targets to ensure the appointments we make reflect the makeup of society. If we can do that, we give people the opportunities they deserve – and really make a difference.’

For Joëlle, that’s why The Great Divide is so needed. Whether your frontline is a boardroom or a playroom, when you join God’s work two things happen. ‘First, it instils kingdom values in society. And second, people ask: “Why do you do that?” And then you have a chance to give an account of your faith.’

The majority of Christians feel neither envisioned nor equipped for mission in the places where they spend 95% of their waking lives. But Joëlle – and thousands of ordinary Christians like her – give a glimpse of how society might be transformed if they were. It’s a future worth working for 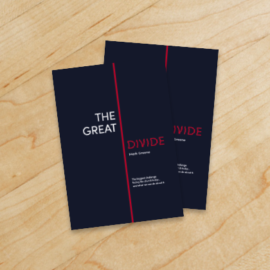 Discover more about the biggest challenge facing the church today – and what we can do about it.